Breakfast is a huge deal at our house.  All of my kids, as well as my man, roll out of bed saying that they’re hungry.  I tend to want to hang back for an hour or so, but I think they might pass out.  For real.  So, I knew I needed to come up with breakfast options apart from grain cereals, fruit and oatmeal. (Although, they are loving the no cook oatmeal in mason jars I’ve been making! It kind of rocks. Have you had it, yet?!)

Here’s what we came up with and I think they’re pretty fabulous:

First, use a sliver of vegan butter to saute (I, literally, used a sliver and it was enough for five burritos).  Add in a small, diced onion and whatever kind of peppers that float your boat. I used red and orange sweet vine peppers.  Salt and pepper to taste. 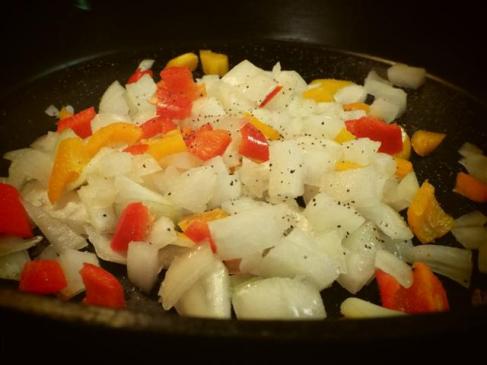 While these are cooking, grab your tortilla and throw some raw spinach and Daiya cheese on it.  We used cheddar because the kids like it, but I think pepperjack would rock this! 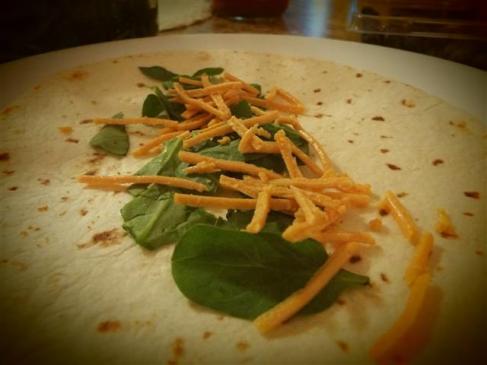 I added the spinach and cheese before adding my “eggs” and other yummies because the heat from the tortilla and the cooked ingredients will wilt the spinach and melt the cheese to make it all kinds of good!  Next, toss extra firm tofu in your pan and add a touch of sea salt. 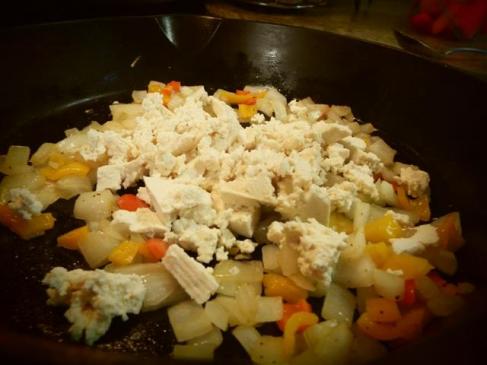 Over the last week, we’ve used tofu about four times.  The key is to get it dry enough.  I finally did that by wrapping it in a towel, then wrapping it in another towel and then sitting it on a third towel and slapping some cook books on top of all those towels hiding my tofu.  In about 15 minutes, it was perfect and cooks up SO much better!!  For real, it needs to be dried well.

Then slap your cooked ingredients on top of your spinach and cheese: 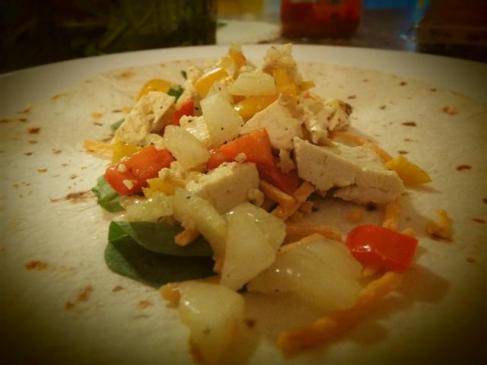 Fold it up, add some fruit and some salsa and chow down.  This picture is of my youngest daughters burrito, who eats the least amount of breakfast.  (I have no idea why I didn’t use one that was full, fat and overflowing, but I didn’t) 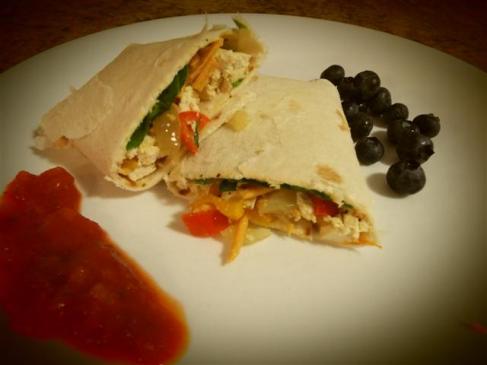 Finally, one of THE best things about these is that they can be frozen! That tickles me pink, because sometimes life is hectic in the mornings, right?  Grabbing these and tossing them in the microwave or oven is so much simpler than having to run around making breakfast, plus these can be portable, if you’re brave.  I have these left in my freezer right now.  (I hate the lighting in this photo. It kinda looks like zombie burrito lighting, but I couldn’t get the depth to pick up on the other settings. It is what it is.) 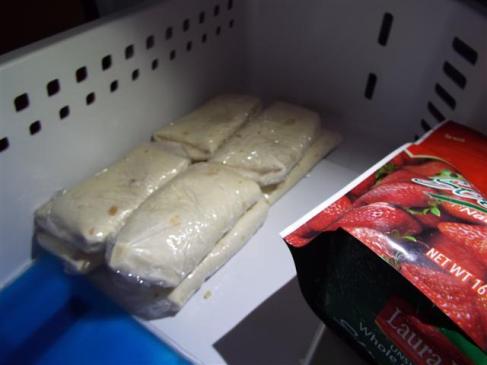